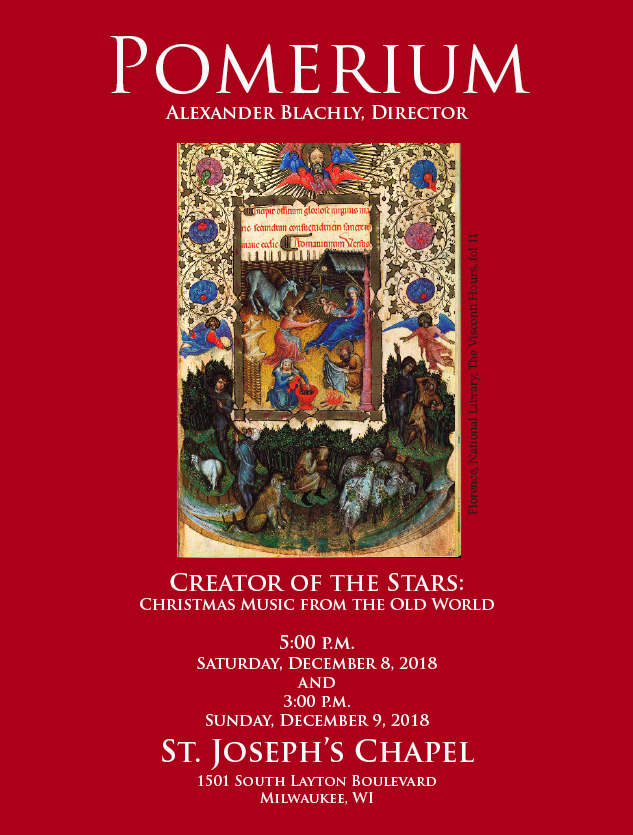 Among the themes celebrated in the sacred art of the Middle Ages and Renaissance, none approaches in significance the threefold mysteries of the Christian faith: Christmas, Easter, and Pentecost—God’s birth as man, his resurrection from death, and the dramatic bestowal of the Holy Spirit after Christ’s ascension. These three supernatural events served from early on as the pillars of the Christian religion. Yet the Gospels of Mark and John do not describe Jesus’ birth, and Matthew does so only sufficiently to establish that Mary conceived Jesus by the Holy Spirit. Accordingly, the Church for nearly two thousand years has relied heavily on Luke’s extensive narration of Christ’s nativity, incorporating the many colorful elements of his account into the chants, prayers, and readings for the Christmas season.

Because of their pre-eminence, Christmas and Easter from early on required not just a full day of Hours of the Office and a Mass, like the other great feasts, but also at least a month of preparation: Advent for Christmas, Lent for Easter. Each served also as the springboard for celebrations in their wake: Circumcision and Epiphany for Christmas; Ascension and Pentecost for Easter. Thus, the Christmas season extends from the Sunday nearest to St. Andrew’s Day (November 30) to the beginning of February. Throughout this period the liturgy continually recalls Mary’s virginity, the birth of Christ in a stable, the wondering shepherds, the host of angels singing “Glory to God in the Highest,” and the adoration of the Magi. The emphasis on the Virgin birth of Jesus confirms that in all respects God’s appearance on earth as man marked a break in the natural order, something præter rerum seriem (“beyond the order of things”) that could only occur natura mirante (“to the astonishment of nature”). In time, Christmas came also to represent the Parousia, the second coming of Christ, thereby endowing the prophecies of Christ’s birth with an additional layer of meaning.

Our concert presents a selection of Gregorian chant and monophonic devotional songs (cantiones) for the Christmas season and follows each with its polyphonic elaboration by a Renaissance composer. To appreciate the full effect that polyphony produced in the Renaissance, we must remember that throughout most of Europe the most frequently heard music in the church prior to the 17th century was monophonic chant. Although the polyphonic works heard here stand on their own as independent works of art, we comprehend them best in recognizing their origins as polyphonic elaborations of already well-known melodies and words.

For the modern listener, perhaps the most striking aspect of the Renaissance elaborations is their supple and, as it were, “three-dimensional” character. In this respect they mirror exactly the progression in Renaissance painting, as it moved from more stylized two-dimensional figures to full-blooded representations who look capable of stepping out of their frames into our own space. As might be expected, the latest musical elaborations in our program—composed when it was widely accepted that music can illustrate specific ideas, emotional states, and natural phenomena—produce the most dramatic emotional effects. The chant items and the earliest Renaissance elaborations, on the other hand, impress us with their austere and mystical beauty.