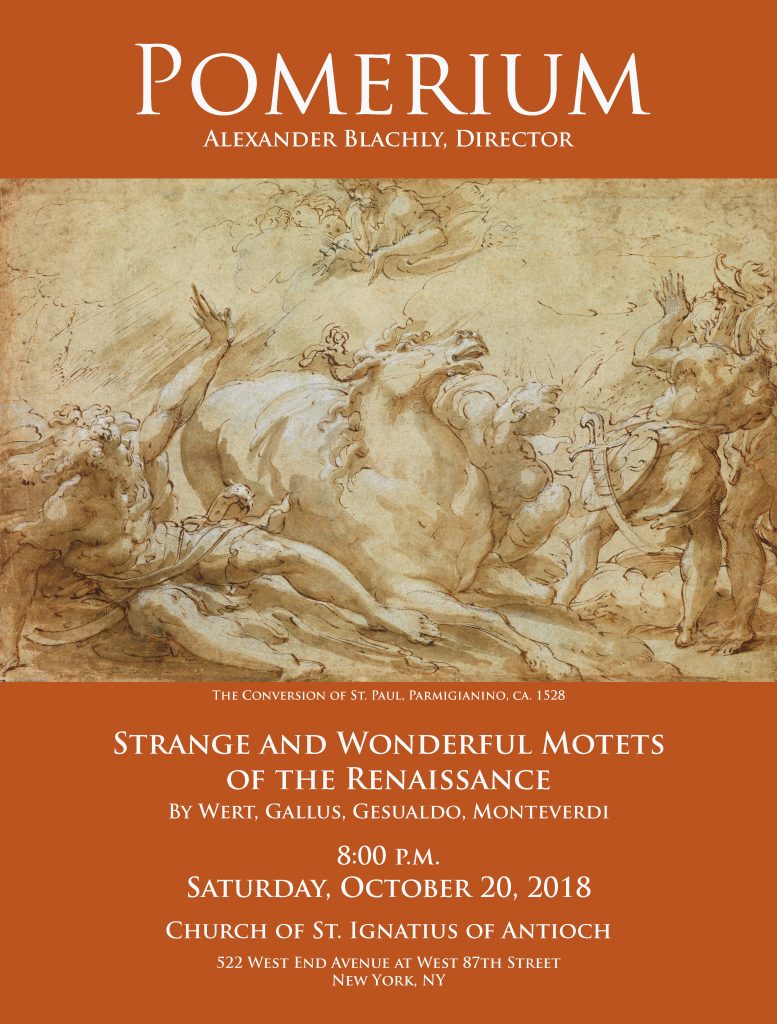 Strange and Wonderful Motets of the Renaissance

RACHEL WEEPING FOR HER CHILDREN

THE MIRACLE OF CHRISTMAS

A VOICE IN THE WILDERNESS

THE MIRACLE OF ASCENSION

CHRIST AND THE CANAANITE WOMAN

CHRIST ON THE SEA OF GALILEE

CHRIST ON THE CROSS

THE CONVERSION OF ST. PAUL

The strange and wonderful pieces on today’s program, brilliant though they are, remain under-recognized. Their sixteenth-century creators experimented with effects intended to capture the attention of listeners, perhaps to puzzle them, certainly to surprise them, even to shock them. The practice was not widespread. With notable exceptions, such as Andreas de Silva’s Omnis pulchridudo Domini, the fourth work heard in today’s program, such music was rarely copied into Roman manuscripts until after Palestrina’s death. Similarly, it is only after the sixteenth century that we find music of this type in England, Germany, or Spain. It seems to have bypassed France altogether. Our strange and wonderful pieces, however, represent one facet of a larger, more widespread artistic phenomenon known as “Mannerism.” In painting, Mannerism first arose in Florence and Rome. In music its origins are found in non-Roman Italian cities, especially Mantua and Ferrara, whose courts cultivated the avant garde. 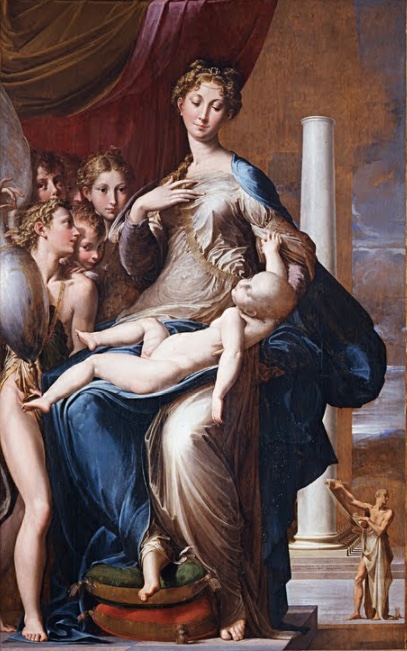 One of the most famous paintings from the early phase of Mannerism, Parmigianino’s Madonna of the Long Neck of 1534, presents the viewer with multiple curiosities (see image above). The Madonna herself sits in a strangely unstable way, appearing to be sliding off her seat. Her entire body is oddly elongated. If she were standing she might be over seven feet tall. The baby lying none too securely on her lap seems considerably oversized for a normal infant and has blue-ish forehead skin the color of a corpse. A tiny figure in the lower right-hand corner of the canvas holds a scroll and seems to be proclaiming something. The Madonna’s neck is, as the painting’s name would suggest, too long, as are her fingers. What could be the meaning of the ivory pillars, which hold up nothing? Why is the setting indoors on the left and outdoors on the right?

An explanation for some of the strangeness might to be that Parmigianino has superimosed the Pietà topos onto the Madonna and Child topos, with the Virgin holding both the crucified Jesus and the baby Jesus. The small figure may be Isaiah prophesying Jesus’ birth, the standard “meaning” of Madonna and Child images across many centuries. In this interpretation, Isaiah is small to represent how far in the past he existed. The ivory pillars may be intended to reinforce our focus on the neck of the Madonna, whom Christians had long identified with the Beloved in the Song of Songs. The Old Testament poem describes the Beloved’s neck as “sicut turris eburnea” (“like an ivory tower”). Still to be explained are the nearly naked figures on the left bearing a silver vase. Are they angels? Probably, because part of one wing is visible. If angels, though, why the provocatively naked leg in the foreground? Perhaps this is an allusion to the eroticism of the Song of Songs itself. 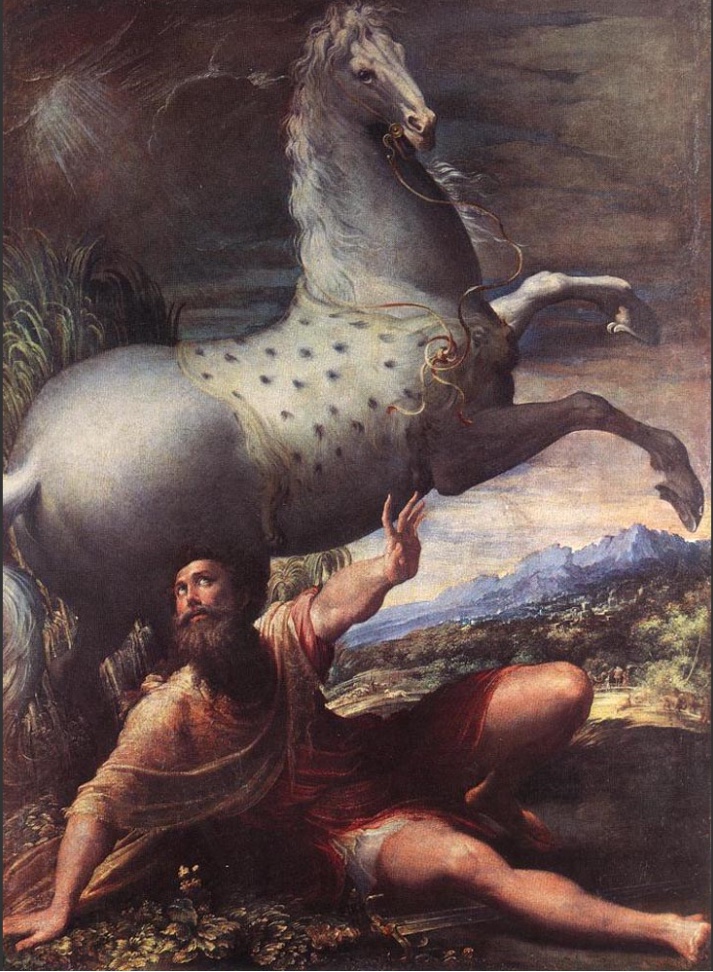 Seven years prior to the Madonna of the Long Neck, Parmigianino painted his Conversion of St. Paul of 1527. Here the image emphasizes the violence of the event by depicting St. Paul’s gigantic horse rearing dangerously above its rider, who lies sprawled on the ground facing the viewer, his right leg thrust in the foreground. We realize that he has been blown off his mount by the mighty voice of Jesus calling out from heaven. Not only is the horse above the rider an inversion of expectations, but Parmigianino has also used foreshortening perspective to fool our eyes into seeing St. Paul as almost three-dimensional. In a pen-and-ink study for the same scene, Parmigianino again emphasized the powerful horse, terrified and wild-eyed (see poster, above). This study also includes Jesus in a cloud, calling out to Saul.

Clear parallels exist between Mannerist painting and Mannerist music. The Mannerist composer Giaches de Wert preferred texts that recount miraculous events or describe extremely emotional scenes. Inspired, perhaps, by Parmigianino’s depictions of the Conversion of St. Paul, in Saule, Saule (published in 1581) he exploits the drama of the event. This is accomplished first by drastic contrasts in volume between two choirs, which periodically function as representations of Jesus and Saul, respectively. When the motet opens, Saul hears a distant voice from heaven coming closer and louder. Frightened, he whispers, “Who are you?” To create the full force of Jesus’ voice thundering down “I am Jesus, whom you are persecuting!” the choirs combine in a wave of sound resulting from eight separate voice-parts calling out the words in close repetition. Then comes Jesus’ powerful command: “Arise and go to the city!” To express sorrow (Vox in Rama), Wert drew on the technique, established earlier in the sixteenth century, of descending chromatic scales. To express extreme emotion, he favored large melodic leaps and unstable harmonies (Vox in Rama and Vox clamantis in deserto)—perhaps as a musical expression of the elongation of form that is so prominent in many Mannerist paintings. To express the waves of the Sea of Galilee when Jesus and his disciples are caught in a violent windstorm (Ascendente Jesu), he causes all voices to collide in rapid, out-of-phase syncopations.

Where Wert specialized in theatrical effects, Gesualdo explored the psychological realms of despair, sorrow, and guilt. Daring chromatic effects and searing dissonances are his trademark, especially prominent in the twenty-seven large-scale responsories he wrote for Holy Week. Tonight we hear one of the shortest but most powerful of these, O vos omnes. In a truly Mannerist move, Gesualdo begins his setting on the most unstable of bass notes: B-natural, a ninth below middle C. (Wert’s Vox in Rama begins on the same bass note.) The excruciating chromaticism of “si est dolor similis sicut dolor meus” (“if there is any sorrow like my sorrow”) combines both pain and sweetness, emotions the murderous but guilt-ridden Gesualdo well understood—and which he had an aptitude for expressing in the polyphonic idiom of the Renaissance. In that style, high, low, and middle voices echo each other throughout the texture, in effects that at times are juxtaposed to chordal passages, as at “o vos omnes, qui transitis per viam, attendite et videte.” No matter how far they depart from stability, Gesualdo’s chromatically tangled lines of polyphony always cadence in pure major triads.

Slovene composer Jacobus Gallus, who lived and worked in Moravia and Bohemia at the end of his life, created in his Christmas motet Mirabile mysterium one of the most unusual works of the Renaissance. The words proclaim that “on this day a miraculous mystery is declared, with [divine and human] natures having been altered. God is made man, and that which he was [i.e., divine] he remains; that which he was not [i.e., human] he assumes, suffering neither commixture nor division.” Each phrase in this text provides a rationale for Gallus to introduce ever more unstable and conflicting chromatic effects, with the overthrow of the normal rules of musical composition representing the overthrow of the laws of nature.

The great scholar of Renaissance music, Edward Lowinsky, was so impressed by the chromatic effects of Andreas de Silva’s Omnis pulchritudo Domini, expressive of the miracle of Ascension, that he thought the composer must have been Spanish. It appears now that Silva was probably Flemish, but writing in an idiom ahead of his time. (Omnis pulchritudo Domini is preserved in the Medici Codex of 1519.) The slow-moving cantus firmus, proclaiming the words “With hands lifted up, he was borne into heaven,” enters late and in the middle of the texture. Once having entered, its long notes, which guide and control the four other voices, allow Silva to generate unexpected, strange harmonies—harmonies evocative of the miracle of Ascension that is being declaimed in two texts simultaneously. Effective word painting of this sort, heard here in a striking way, would become the universal goal of the Mannerist composers.

A remark, finally, on the single work by Monteverdi heard here. Originally a madrigal written to an Italian text, Tu vis à me abire shows Monteverdi’s skill in representing the emotions of the abandoned lover of Guarini’s Rime, madrigal 83. Six years after Monteverdi’s setting appeared in print in his Madrigals, Book IV, of 1603, Aquilino Coppini, a skilled rhetorician from Milan, replaced Guarini’s Italian “You are abandoning me, hard soul! What harshness to be the soul of someone’s heart and to separate oneself while feeling no sorrow!” with sacred Latin words spoken by Jesus: “You wish to leave me, hard soul! What extreme duress to cleave to fallen ones and to be separated from eternal glory!” Most notable in both versions is Monteverdi’s musical depiction of “separation,” with voices that begin phrases in unison slowly pulling apart. Monteverdi’s music has a dramatic and operatic feel, presaging effects in the actual operas that would soon win him his greatest acclaim, beginning with L’Orfeo of 1607.